Click to Play
I feel drawn to learn how to pray for organizations. One place I want to start is deepening my understanding of what prayer is. In a broad sense, I understand prayer as conversation with the sacred. But, I want to get to know more creative and personal images of prayer. So, here is my request and challenge to you. Fill in the blank, in one sentence or less: For me, prayer is _____: To get us started, I put some statements about prayer in this video.
Posted by Michael Bischoff at 12:36 PM 8 comments:

Does "Evil in the Workplace" Exist? 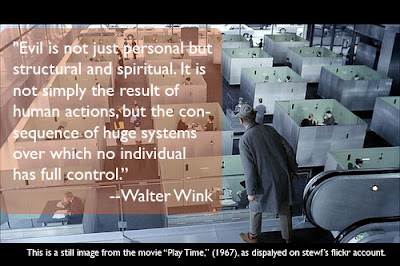 Part of what motivates my sabbatical is a belief that there are unseen, spiritual realities behind every organization. I am seeking to name and engage these spiritual realities.
I was recently listening to an unedited version of an interview from my favorite radio show, Speaking of Faith. In this show, the host, Krista Tippet was interviewing Jonathan Greenblatt about "The Business of Doing Good." Something that Krista said during this conversation quickly and strongly tapped into the motivation behind my sabbatical. Here are some excerpts of what Krista said:

"I've observed that some organizations that do the best work in the world can be most dysfunctional... I've actually thought that there would be a show to do called 'The Problem of Evil in the Workplace'....I mean, it's just that any institution becomes a place that we interact with each other, and we bring the dark side of the human condition to work as well as the great side."
Thanks for bringing this up, Krista! I've been afraid to. I prefer a worldview that doesn't believe in evil. However, in recent years, I have had some experiences that I can best understand as an active spiritual force that seeks to harm. These spiritual forces that I've perceived have appeared to be attached to institutions.

Yet, the words "evil in the workplace" point to a spiritual reality that I'm drawn to understand and engage. I think that much of the dysfunction and pain in workplaces can be attributed to bad organizational structures, policies, and personal ethics. Yet, I sometimes find it useful to talk about a larger spirit that can be behind the details of these dysfunctions, or behind the happy coincidences that lead to success.
There have been many times I felt swept away by both negative and positive spirits moving through institutional systems. In some periods, patterns of subtle racial bias and sexual harrasment seem to build off of each other--and mix together with disempowering, confusing power structures in workplaces. I've contributed towards these negative mixes, both actively and passively. At some times, it has felt to me like there is a dark cloud following a workplace. This cloud seems to spread like an interconnected web, even though none of us individually want to act in that spirit. I want to be clear that I don't mean this as a critique of any organization that I've worked with. I've been fortunate to be in workplaces with many ethical and skilled co-workers--and it still felt as if we were sometimes resisting a pull towards a destructive spirit.
And many times I've felt a spirit of creative, redemptive goodwill spread quickly through an organization. I've seen people take risks to honestly and vulnerably confront a problem and change the tone throughout the workplace. Sometimes humor and playfulness can also ripple throughout the organization, removing a heavy layer of anxiety.

I think that many kinds of spirits can snowball. I want to understand more about how this happens. Many of these dynamics can be explained in terms of organizational culture--yet I am also drawn to the religious and spiritual language, such as "evil," that point to the way these forces can be much bigger than my intellectual understanding.

What about you? Do you think it is useful to talk about "evil" or other spiritual forces that operate in workplaces? Have you experienced them?

And if there are negative spiritual forces active in our workplaces, how do we contain and transform them? Stay tuned for future posts!
Posted by Michael Bischoff at 3:38 PM 8 comments: