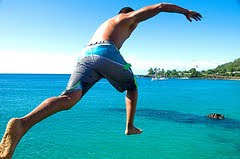 "May what I do flow from me like a river, no forcing and no holding back, the way it is with children."
Posted by Michael Bischoff at 4:30 PM

Wow! How lovely. I agree with your sense of things and marvel at your skill in connecting ideas.

Thanks for sharing your gift as a communicator.

Hope you are well and our paths cross before the snow falls.

Weren't you going to share your reflection on the year... at an event... maybe I missed it.

I tried to guess who you were by your tone of typing, but I didn't come up with a guess.